Roughly two centuries before the Common Era, a frolicsome chap named Hannibal turned the Second Punic War upside down when he piloted a herd of elephants and soldiers through the Alps in order to avoid the Romans on land and sea, and attacking Rome from the north - the side they had least suspected it.

Two millenia later, we can safely agree there are less bloody, war-torn ways to conquer the Alps - without losing out too much on the spectacular side.

Riding the Route des Grandes Alpes on your motorcycle for instance, an incredible journey across the French Alps, from Lake Geneva to the Mediterranean Sea.

The roughly 710 kilometer long route kicks off from Thonon-les-bains and heads towards Nice, while spoiling you with no less than eighteen Alpine mountain passes. Iseran, Galibier, Izoard, Colombière, Bonette, and Cormet de Roselend and their panoramic views will leave you gasping for air.

Starting off in Thonon-les-Bains, you won't be itching to hit some curves very long, as the route crosses its first string of Alps between Lake Geneva and the Mont Blanc massif from the moment you dive into the Aulps valley.

The gorges du Pont du Diable will lead you through dense forests, endless meadows and ski resorts before reaching the hamlets of Les Gets and Morzine. Riding on, you might spot the Mont Blanc massif on your left hand side, but you can't miss the wall of sharp teeth upfront: le Chaîne des Aravis, rising up above all surrounding pastures and villages.

Right after you've devoured the magnificent Col de la Colombière, the Route des Grandes Alpes dunks into the heart of this enchanting scenery through the famous villages of Grand-Bornand and La Clusaz, and of course the Col des Aravis, and its fairytale landscape.

Keep an eye out for Beaufortain, as it is a gem - not only for its famous cheese - but even more so for its wild and authentic surroundings, which make it an aberrant area.

The Cormet de Roselend and the nearby dam are well worth a visit, as the deep-blue lake clashes dramatically with the green and white drapery, spread out over the surrounding mountains.

On the edge of the Vanoise National Park, the route zigzags its way down into the valley, and climbs up again towards Val-d'Isère and Col de l'Iseran.

The latter not only being the crossing point to the Maurienne Valley - but also 'The King of the Alps'. The Col de l'Iseran might just be the holy grail for many motorcyclists: it’s the highest paved mountain pass in the Alps, which towers exactly 2.764 metres over sea level.

As a part of the Graian Alps, it is situated in the department of Savoie in France near the border with Italy, and links the valley of the Isère and the valley of the Arc River between Val-d'Isère in the north and Bonneval-sur-Arc in the south.

The D902 road curls up and around the Col, which makes it one of the highest mountain roads of Europe - but sadly, also one of the worst maintained ones.

The surface isn’t very smooth and has some gaping holes and tears in it - exactly what you don’t want when you crack the throttle for some speedy cornering. But it’s enjoyable nevertheless: just cut back on gas a bit, enjoy the views, and you’ll be more than fine.

A tip of the house: the north side of the pass road will spoil you with multiple galleries and tunnels, and a steep ascent/descent.

Extra tip: if Iseran and Galibier are the crown jewels of the Maurienne Valley, know that it is also a gateway to Croix-de-Fer, Madeleine or Mont-Cenis. Well worth a small detour...

The combination of the Galibier and the Telegraphe spoils you with a perfectly asphalted string of roads, high altitudes, dizzying curves and wonderful panoramic views.

This part of the route will have you kicking off with the Col de Telegraphe, dragging you through woods with a bunch of hairpins and a very smooth road surface. On top of the col, there’s a fantastic stopping point, which offers enough possibility to have lunch or dinner and is very photo friendly as well.

But make sure to get your act together to take on the big one - the Col de Galibier. This pass reaches way above the tree line, which gives it a lunar surface and a surreal otherworld-feel.

Lots and lots of cyclists are pounding their way up the hairpins or rocketing down if they’re on their way back, but luckily the views are very open - so you should be able to dodge all of them. 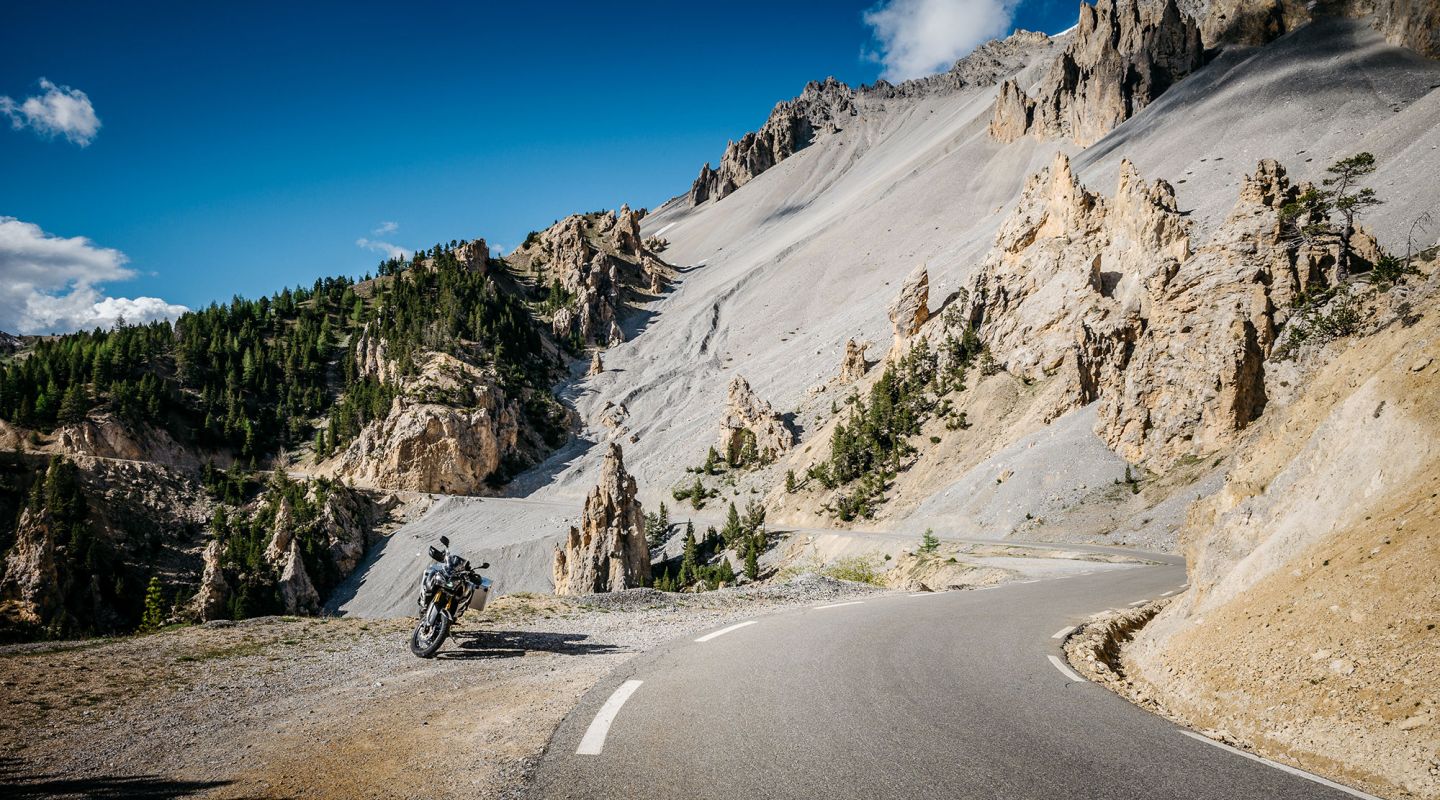 After that portion of human powered cannonballs, you might want to aim your focus away from the sheer drops virtually along the entire route and into the amount of hairpins that would make a well trained astronaut dizzy.

Needless to say the route is not recommended if you have a pillion who’s riding along for the first time - nor is it any good for the faint of heart... That said, the reward at the top is enormous, with a magnificent scenery awaiting.

Park your bike and walk a few minutes to a viewpoint which allows to admire the surrounding peaks Meije, Grand Galibier and Mont Blanc. An absolute must.

The Col de l’Izoard is definitely one of the nicest passes in the French Alps, but beware: with its height of a whooping 2.360m, it is subjected to late opening - so better double-check before heading over there! However, it will certainly be accessible during summer months via the D902 road, which connects Briançon in the north and the valley of the Guil in Queyras, which ends at Guillestre in the south.

Known as the Casse Déserte, this area has formed a dramatic backdrop to some key moments in the Tour de France, and is a geological freak of nature.

Lying near the entrance of the Parc naturel régional du Queyras, the road twists and twirls endlessly while feasting your eyes on limestone and needle-like, ocher-coloured rock formations.

Switchbacking your way down te D902, the road will lead you from the southwestern exit point of the Parc naturel régional du Queyras, via Guillestre, straight into the welcoming arms of The Col de Vars.

This Col would not classify as the highest one in the area, but it's worthwhile to include it in a ride as it is in a very beautiful part of the French Alps. It is located between the departments of Hautes-Alpes and Alpes-de-Haute-Provence, and connects the Ubaye Valley with the Queyras valley and Embrun.

With a summit that’s elevated 2.108 meters above sea level and a rather steep climb, it is a challenge - not only for the many cyclists on the slopes, but also for the motorcyclist who’s got to find the appropriate gears.

As said, the pass is traversed by the D 902 road, which is rather well paved, but nevertheless remains closed from November to April due to snowfall. The pass has however been frequented by the Tour de France more than once, which sadly - looking at the amount of tourists up and around the Col de Vars - has not remained a well-kept secret for long…

Riding further towards the south, you can get ready for the 'pièce de resistance', the masterpiece of this trip: the Izoard pass. The combination of Mediterranean and lunar landscapes turn this one into of the incontestable jewels of the Alps.

Endless herds of larches and pines can barely hide the impression that time seems to have come to a standstill - turning this one into a glorious riding experience.

Situated roughly in the middle between the Queyras and Mercantour national parks, the magnificent Ubaye valley will pose a dilemma: taking the main route towards the awe-inspiring Col de la Cayolle or taking the road that will lead you to the heart of the Mercantour via the Col de la Bonette.

We've opted for the latter, as it is one of the highest mountain roads in Europe (2.802 m) - but feel free to try both! The ease of the ascent might actually surprise you, as the road surface is as smooth as baby buttocks and the backdrop gets more beautiful by the inch.

As the altimeters add up, so does the contrast between the vegetation at the bottom of the pass and the arid, volcanic surroundings at the top. As you get higher, the road gets more and more challenging - but it is a test that rewards you almost immediately with one of the most dazzling views in Europe.

But that’s not all: riding down the other side of the mountain will treat you to a race circuit-like experience, supplemented with a breathtaking dive into the valley. One to devour and cherish, over and over again. Great stuff.

Backboned by the Piedmont region, the 150 km long Mercantour national park will treat you with some last alpine peaks before heading straight towards the Mediterranean Sea.

The landscape will transform dramatically into more southernish - not only the vegetation, but also the architecture and the allround 'feel'.

The final part of our trip will entertain you with steep roads and perched villages, as a chainlink of the Alps and the omnipresent "Big Blue". Make sure to enjoy the Col de Turini, as it will be the last mountain before plunging your way down to Menton and the Côte d'Azur.

From there, the Mediterranean will guide you towards the finish in Menton. But hey, why not go back the way you came?