The Transalpina or DN67C located in the Parâng Mountains group, in the Southern Carpathians of Romania, is one of the highest roads of the Carpathian Mountains. It connects Novaci, south of Parâng Mountains, to Sebeş in the north. It is said that the road was built under King Carol II and rebuilt during World War II by German troops and it is called The King's Road by the locals. Also a story has it that Nicolae Ceauşescu had the Transfăgărăşan Road (DN7C) built during the communist regime just to surpass the Transalpina. The road has its highest point at the Urdele Pass, where the elevation is 2,145m above sea level. Given the high altitude, the road is closed during the cold months of the year. Works began in 2007 in order to transform this spectacular road into a modern highway (148 km), allowing a rapid transit between Oltenia and Transylvania. 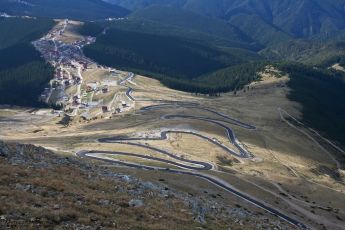