Five destinations to ride over a (long) weekend: 1st Edition

“I want to break free… I want to breeeeak free…” Although the bass guitarist of Queen shares his name with a well-known enduro racer, we doubt the latter lyrics of his hand had anything to do with John Deacon’s - the four string one - need to get out on a motorcycle trip.

But sometimes a weekend out on your bike is all you need to ‘break free’ and get things sorted out in your mind.

A blow of fresh air, heading from your nostrils to the bottom of your lungs and back, cleaning out any fog in your thoughts.

Aah! No worries, we’ve got you covered: we’ve gathered ten suggestions for a (long) weekend out in Europe, weaved together by Motorcycle Diaries roads.

Although the British Isles have never been shy for magnificent motorcycle roads, you can arguably find a bunch of the best ones in Wales.

Even if you’re coming from the European mainland, Cymru - as Welshmen tend to call it - is only a few riding hours away: 460 kilometers from Dover, or 220 kilometers from Hull. With its coastline of 2.700 kilometers, a total - largely mountainous - area of almost 21.000 square kilometers, country and coast that are peppered with a special mix of historic sites, and changeable, maritime climate - this unique part of the United Kingdom always has a bit of adventure layed out for you.

We’ve chained up 13 Motorcycle Diaries Roads for you - totalling 169 kilometers - from Snowdonia up north, heading down through the Shropshire Hills, to end up in the Brecon Beacons National Park.

Snowdonia. It sounds a bit as the title of a Disney Cartoon - but it is a version for travel bug infested adults, in this case. The upper part of Wales is - rightfully so - renowned for its utterly dramatic, panoramic and contrasting scenery.

Not in the least by its tallest ‘resident’ the Snowdon, a mountain of 1.085 meters which towers over the gobsmackingly beautiful area of north Wales.

The hindmost part of this region’s name is the perfect clue to what to expect in the Shropshire Hills - as you might or might not know, AONB stands for ‘Area of Outstanding Natural Beauty’.

So please stretch your riding scheme a bit to explore the dazzling landscape of this part of the weekend trip. Among the hills, rivers, woods and farmland there is an amazingly diverse geology, a rich heritage including hillforts, castles and remains of early industry, a wonderful mix of wildlife, and stunning views around every corner.

Truly amazing stuff. The A488 we’ve selected carves right through the heart of the Hills for just 40 kilometers, but it ‘ll be plenty to win your heart over. Enjoy!

Undulating green landscapes? Powerful waterfalls? Fairylike towns? They’re all there. Separated from Snowdonia by the Cambrian Mountains, the Brecon Beacons uplands span almost as far from west to east as Snowdonia National Park does from north to south - but they look nothing alike.

While the rocky remains of sleeping volcanoes dominate the majority of Snowdonia, the Brecon Beacons National Park seems to consist of grassy moorlands, heather-clad cliffs and Old Red Sandstone peaks, mellowed by weather and time.

Our roads carve downwards through the eastern part of the Park, to rise up again via the western part - about 70 kilometers worth of sightseeing-done-well. We suppose you’re in love with the region by now, but to make sure you never forget it, we’d suggest you staying out for a night in the Park: if the skies are clear, you’ll be overwhelmed by a dome of stars and meteor showers… Stunning.

Discover our three days trip in Wales and download the GPX tracks. 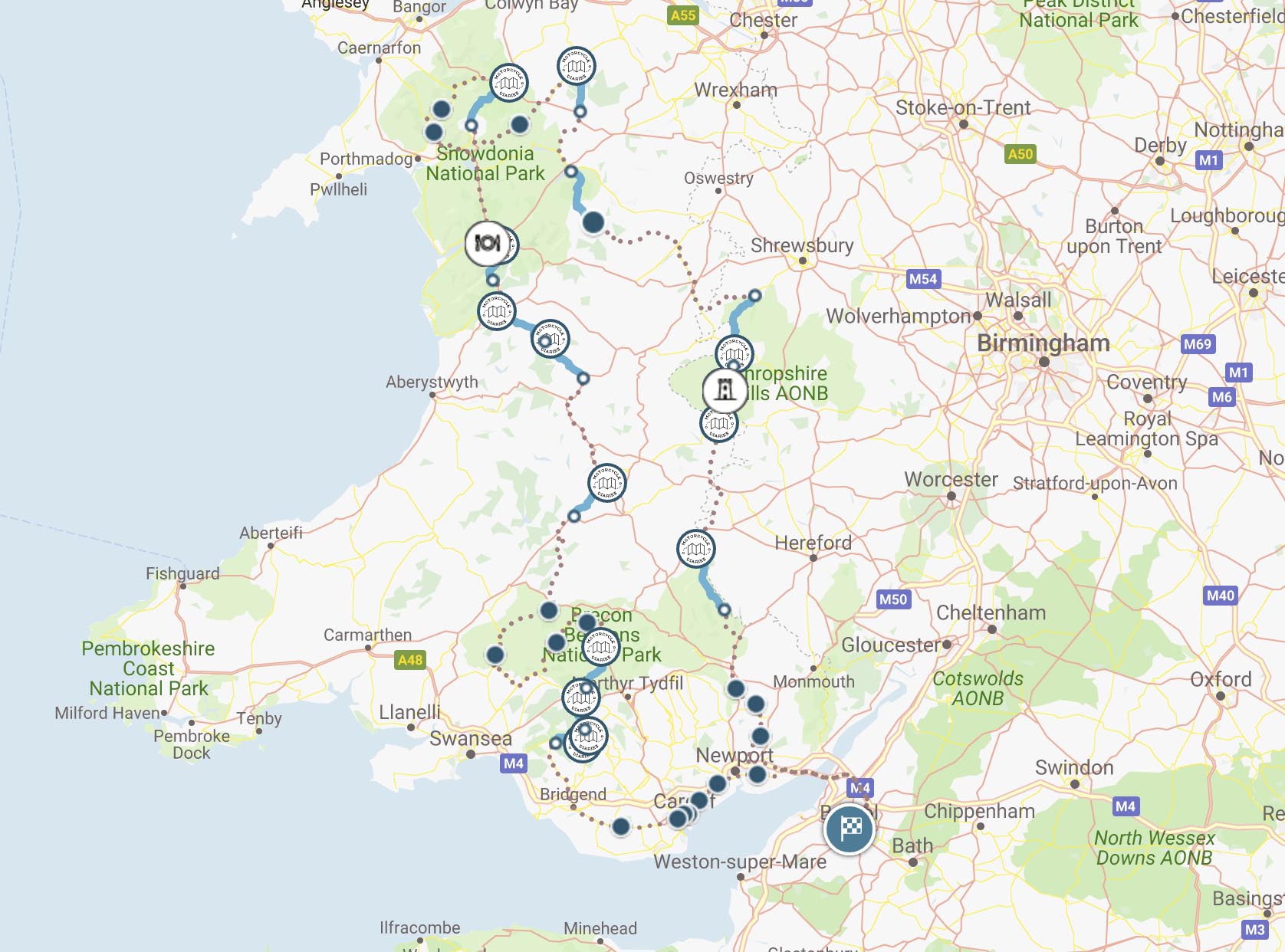 If you need to escape the daily rat race, but you don’t want to ride to the other side of Europe, a weekend to the center of Western Europe might do the trick. France, anyone?

We’ve carefully selected 16 Motorcycle Diaries roads and sculpted them into a 730 kilometers long trail which will lure you and your bike towards the Monts d'Ardèche Natural Regional Park and the Cevennes National Park.

If you believe that a straight line isn’t always the shortest way to get from one point to another, the first part of this route is exactly what you have always been looking for. As in this part of France, the roads tend to be as twisty as the rivers they follow.

From the depths of the gorgeous gorges to the dizzying heights of the Ardeche mountains, you will unavoidably fall under the spell of the region’s Templers villages. The Ardeche region will offer spectacular scenery that you won’t soon forget.

But don’t underestimate the latter: there’s a ton of reasons why this immaculate piece of France was named UNESCO World Heritage Site... Visit an archipelago of separate worlds and explore each of them according to your desires.

Admire the diversity and unique landscapes contrasts in France. Breathtaking vistas, rugged beauty and unspoilt nature like the Cirque de Navacelles, the Gorges du Tarn and Jonte are among the wonders that await you in the Cevennes.

Discover our three days weekend in Ardèche & Cévennes and download the GPX track. 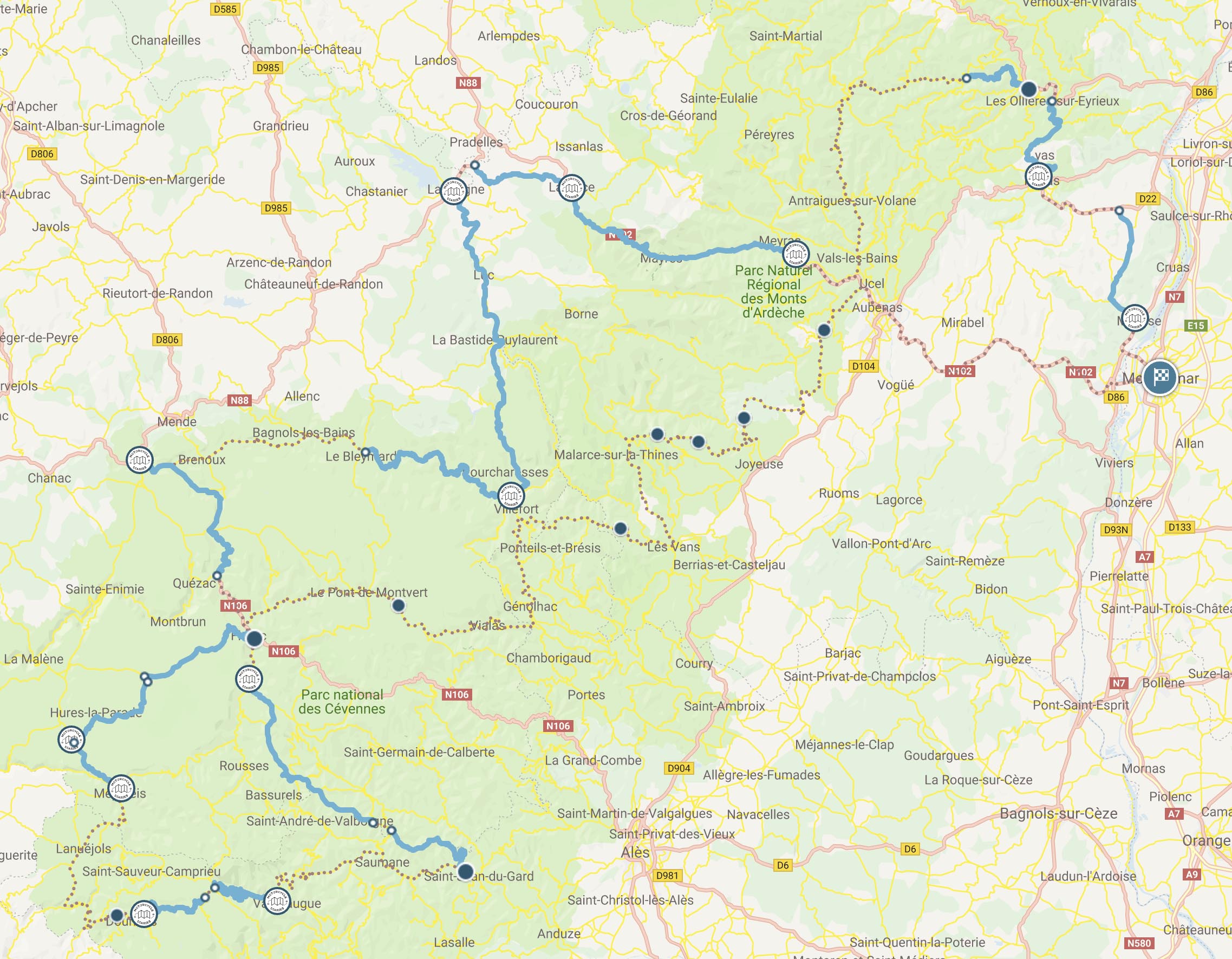 Mention Germany in a conversation about motorcycle touring and we bet the words ‘Eiffel’ or ‘Black Forest’ pop up in the next sentence. We’ve ignored the volcanic part for this weekend trip and focussed on the ‘Schwarzwald’ - as it is locally known.

With its vast forests, spectacular open mountain heights and peaks with grandiose views, its deep and mysterious cirque lakes and charming valleys and nearly perfect asphalted roads, the Black Forest has always been a favourite among motorcyclists.

And why wouldn’t it be: its unspoilt landscapes, nowadays rare in industrialised Germany, characterize this unique and varied part of the country and almost the whole Black Forest has now been designated as a nature park – the largest one in Germany.

Our well-grounded selection committee gathered 10 MD roads, totalling 467 kilometers for you to devour.

Without any connection stretches, that is. A loop which kicks off just south of Baden-Baden, and twists and turns its way over Freudenstadt, Gutach, the ‘halfway point’ in Triberg, Schluchsee, and curls back up north via Waldshut-Tiengen towards Bonndorf. Ja bitte!

You might’ve read or last blog post about our ten favourite scenic roads in Spain - but just so you know: we could’ve easily added hundreds more.

The Iberic peninsula is just one of those places which just awaits canonisation to qualify as an actual heaven on earth. For bikers especially - from great backcountry roads with little traffic, over amazing architectural and natural marvels, to eye-wateringly beautiful scenery, this country has it all.

Take for instance the Parque Natural de la Serrania de Cuenca, which is squeezed in between the Spanish and the Catalan capitals - Madrid and Barcelona.

The Serrania is  famous among hikers and bikers for its ‘Tormagales’, cities that look as if they  were sculpted by the sceneshifters of Lord of the Rings, the canyons carved by the rivers Júcar and Escabas, the extensive natural pine forests and the rare variety of environments of the Serranía favours the development of high biodiversity, serving as shelter for protected species of eagles.

There are only a few roads actually running through the park, but the area surrounding it is equally stunning. We’ve scratched no less than 13 Motorcycle Diaries roads, totalling a stunning 600 kilometers for you to discover.

Starting off from Teruel, heading south-west to the park de la Serrania de Cuenca, from which you’ll aim north-east via Molina de Aragon, towards Morella and back to Teruel. A very ripply and twisty piece of riding - which will best be digested when spread over a couple of days.

Take your time, and you’ll enjoy it even more.

Discover our two days trip around Teruel and download the GPX track.

The Parco Nazionale del Gran Sasso e Monti della Laga is the achilles tendon of The Boot. Quite literally in this case, not metaphorical, as it is situated on the same height of Rome - around halfway Italy.

The Park is extremely rich in geological, environmental, anthropological and cultural goods.

The former ones lie in the record of the Gran Sasso d'Italia, that with its 2.912 m of altitude represents the roof of the Apennines, but significant is also the geological value of the Laga Mountains, that with the Mount Gorzano reach an altitude of 2.458 m.

The best part of it all? It is home to a bunch of Motorcycle Diaries as well: not the most elaborate set we've gathered in this series (six MD-roads, 560 kilometers), but one you'll most likely ride multiple times - the sheer beauty of the scenery and quality of the asphalt 'll lure you into int.

From the Campo Imperatore high planes to the brilliant climb of the Monte Terminillo - as memorable as the hellish descent of the same peak...

The water, flowing copious and pure from the mountains' slopes and feeding rivers and lakes, has been shaping these territories for thousands of years. In every historical age, men supplemented nature with their admirable works, offering us beautiful hamlets still in good conservation status, churches, abbeys and castles, streets, caves,, towns and temples that since prehistory and Roman age have reached us shrouded in mystery and fascination.

A truly marvelous region - which 'll amaze you more with every bend in the road. 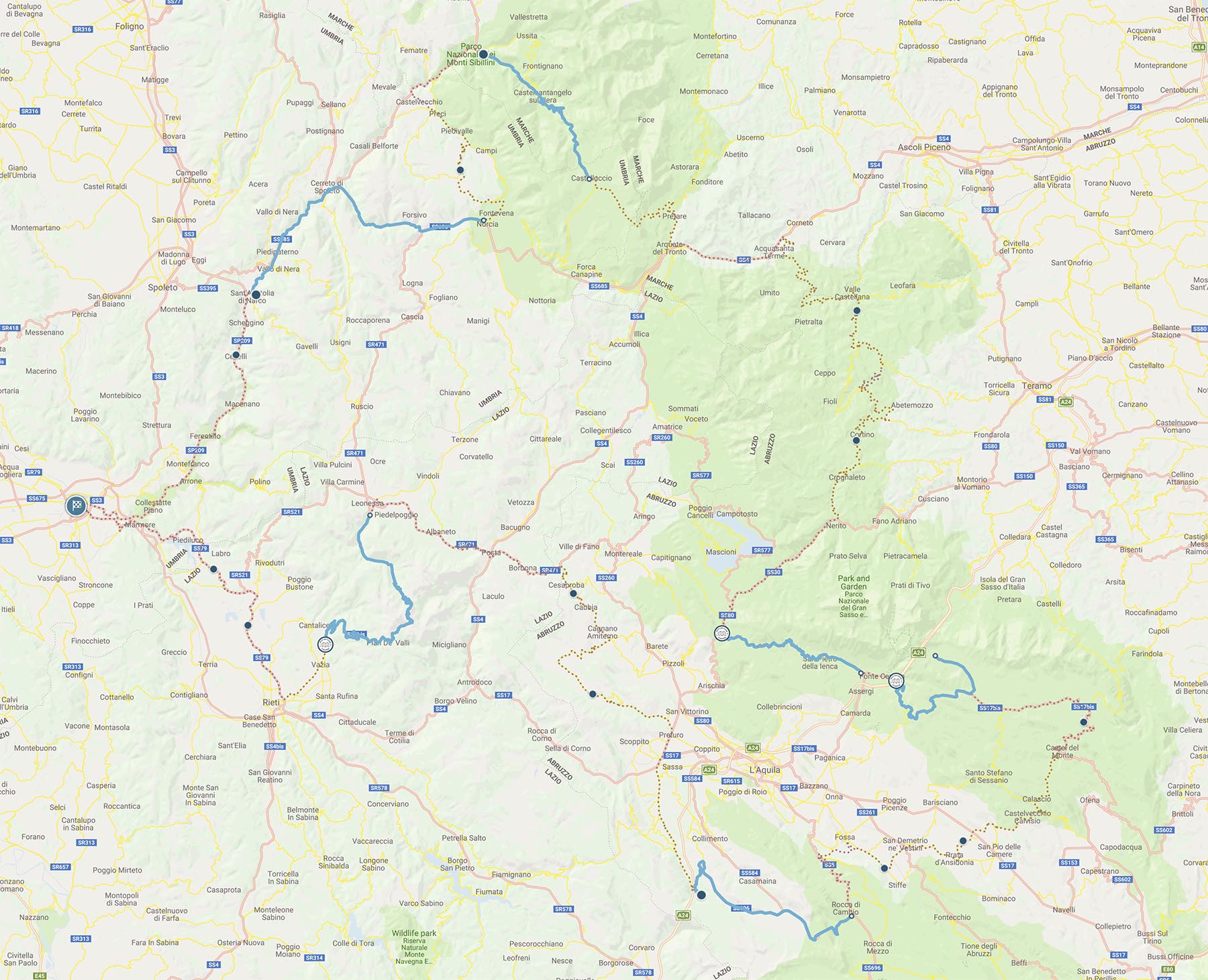 Away from the Alps Vercors & Chartreuse

Nomadik and Co: From Ireland to South Africa - Part VI