HU-631 is a difficult high mountain road located in the Ordesa y Monte Perdido National Park, in the region of Sobrarbe, in the province of Huesca in Spain. At certain times of the year, the road is only one direction. It's still an adrenaline-pumping ride and it's certainly not for the weak lungs, heart or legs. It's narrow, so reduce speed and be prepared to move around and make room for approaching vehicles. The road is 34.3 km long. It is paved but in very bad conditions, especially after the rains. It's quite slippery. The road is in terrible condition and requires strong nerves to negotiate it. It's breathtaking and its reputation is fearsome. The ride is quite steep. It connects Escalona, ​​a small town in the municipality of Puértolas, in the province of Huesca, at an altitude of 613 meters above sea level, and Sarvisé, at 893 m above sea level. Its highest elevation is 1,360m above sea level. This route has humbled many egos. It's not for sissies and shouldn't be attempted by novice drivers. Some sections of the road are extremely narrow. At certain times of the year, the road is only one direction. It follows the Bellos river and crosses the valley of Añisclo, los Sestrales and Desfiladero de las Cambras. There are narrow sections - barely wide enough for two cars - where, if two vehicles must pass, one may have to reverse for a few miles of winding, narrow road to get to a place wide enough to to pass. This should not be attempted by those who do not 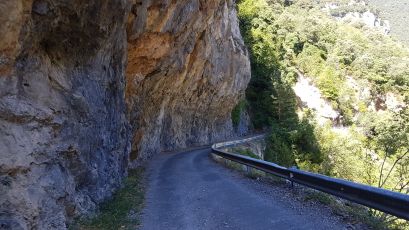 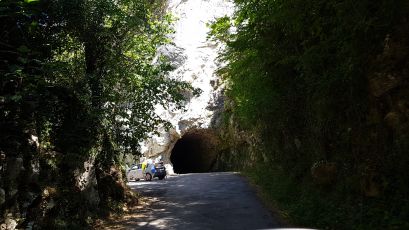 Lannemazan France to Ainsa Spain and back